SMART CITIES IN EUROPE AND ASIA

Urban planners are changing their ways of making cities smart, ushering in a wave of decentralised smart city planning. Solution providers will have to change along with them and find ways to embrace the creative chaos if they want to remain competitive.

Many European cities used to look to Asia when scouting for smart city solutions. Fujisawa, Toyota City (Japan) or Songdo (Korea) were household names among Europe’s smart city planners. Japanese and Korean providers, such as NEC or Samsung, led the way in coming up with smart applications. Recently, this picture has been changing and city planners everywhere increasingly look to Europe as well as European and American firms for inspiration.

Over the past couple of years, two major shifts in how Europe’s smart cities are being planned have started to transform the market. Of course, there are tremendous variations and many countervailing movements in European approaches, but the two developments described below should be closely watched as two potentially powerful and significant trends in smart city planning with a strong impact on solution providers everywhere.

Leadership is shifting from departmental silos working with solution providers to more horizontally integrated and powerful smart city offices. Until recently, many European and Asian smart city programmes functioned according to the same logic: the major solution providers – mainly IBM, Cisco, NEC, or Siemens – pushed their smart city applications, such as traffic sensoring, to city departments, such as the transport bureau, that were working mostly in silos and tried to upgrade the area of the city they were responsible for. Barcelona’s was one typical case for this: “Before, the city was organized like silos. Lighting didn’t talk to traffic didn’t talk to water. Each had its own budget with its own data and its own cameras” (link).

This has been changing dramatically over the past few years. Barcelona shook up its organisational structure in 2014 and installed Julia Lopez as coordinator for its smart city strategy. Helsinki similarly put a development agency in charge, as did Amsterdam, Stockholm and Copenhagen. This means, in Ms Lopez’s words, “creating a global strategy, rather than siloed strategies in different departments” (link). What these offices have in common is their direct reporting line to the mayor’s office and that they cut across various departments.

What this means for solution providers is, as Ville Valovirta, a smart city expert at VTT (Europe’s third-largest applied research body based in Helsinki), told Japan Innovation Network in a recent interview, that the biggest opportunity for smart city solutions over the coming years in Europe will be solutions that cut across silos. Rather than the transportation bureau buying ‘smart traffic sensors’, smart city offices will buy ‘smart mobility’: not to help the transportation bureau deal with congestion, but to potentially help citizens do things like finding the most energy-efficient (environmental bureau), congestion-preventing (transportation bureau) route while measuring noise pollution (citizen affairs bureau) and tracking tourist movements and spending (tourism affairs bureau) – smart lamp posts in Barcelona would be an early example of this. In a nutshell, cities no longer buy individual solutions, but solution systems. 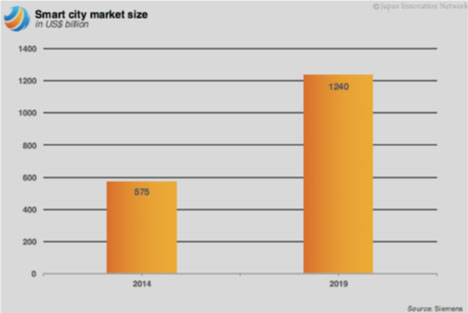 Closely related to this is the shift in focus of these solution systems from hardware and infrastructure solutions to service-focused solutions. The service-hardware divide has always been one of the core differences between many smart city projects in Europe and those in Japan or Korea. But the gap in focus has widened even more over the past few years: projects, such as Kashiwa no Ha near Tokyo or Songdo in Korea are top-down and planned, often from scratch, and led largely by solution providers and – importantly – by developers, such as Mitsui Real Estate or Mitsubishi Estate. The city, for instance Kashiwa, in this is merely playing the role of data provider (link). As a consequence, says Mr Valovirta, these projects are naturally hardware and infrastructure-driven (strongly focusing on construction, sensoring, sustainable energy).

In stark contrast, developers are largely absent in European smart city initiatives: European cities focus not on development or redesign, but on how to work with existing structures, and how to integrate those into smart city management. This means that, on the whole, European initiatives are less infrastructure and hardware-centred. Particularly since planning responsibility has moved in many cases from functional departments to the mayor’s office, new focal points have emerged, much more focusing on citizens’ quality of life, satisfaction, engagement and service delivery: rather than ‘smart grid’ or ‘smart traffic lights’, today’s smart city buzzwords are ‘mobility, ‘open data’ or ‘smart citizen’.

Behind this stands a new view of the city’s place in smart city planning that is beginning to take a hold in smart city offices across Europe: the city as a platform for smart city initiatives, a ‘network of networks’. Barcelona in Spain, Ghent in Belgium, Stockholm in Sweden – they all are pushing this emerging paradigm, focusing on enabling the smart citizen and decentralised solutions rather than one centralised smart city approach.

Quintessential in this is open data, meaning that the city makes all its collected data publicly available for free so that citizens, start-ups, and solution providers can develop problem-solving applications. London, for instance, calls its impressive and easy to navigate open platform Datastore (link). It allows potential solution providers access to over 800 datasets, ranging from crime to healthcare. People then can come up with their own solutions to problems they find, such as in Ghent, whose citizens have developed apps based on its open data platform, AppsforGhent (link), ranging from bicycle traffic navigation to helping parents plan outings with children.

So far, the solution providers navigating this more decentralised smart city process most successfully tend to be platform providers – think, for instance, Amazon, or Google, which is tightly integrated into Ghent’s smart citizen development. Rather than focusing on hardware and departmental smart city infrastructure applications, these firms are focusing more and more on becoming providers enabling smart citizen development. Contrarily, Japanese and Korean firms, according to Mr Valovirta, are in danger of becoming mere technology component providers. They might become stuck in a paradigm of provider-led smart city management (applicable in much of Asia, not so much in Europe – and less and less so), unable to move on to the age of a modular smart city in which interoperability and API economy are the guiding principles.

Solution providers, in order to stay abreast of these emerging trends in smart city management, need to change how they think about smart cities: it is no longer silos in need of solutions to make their department work smarter, it is not even cities looking for solutions to turn their city into a huge real-time data collection machine. Europe’s smart cities, increasingly, will be just the places where smart citizens live.